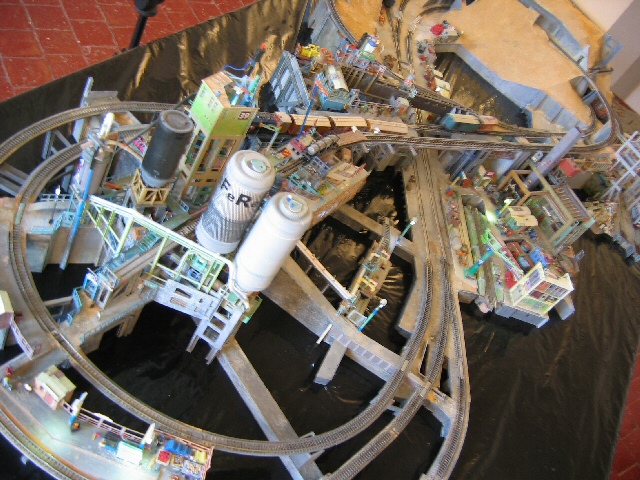 A double track describes a figure eight, an unusual geometric form imposed by the principle of strepsidromie. You won't find this word in your dictionary; it is a neologism, coined especially for ReFeRe from two Greek roots, drome, a path or road and strepsi, twisted. It serves, by means of a branch line, some remarkable installations. It is here that two very important commodities are produced: the special adhesive that binds all of ReFe Re together and the food that fuels its workforce.  Here too the purpose-built vehicles are maintained and the workforce fed.  Work is the sole aim, and noise and smells are part of the scenery. And of course, as is the case throughout the ReFeRe, everything travels by train.

The ‘Collerie’ is an industrial complex for producing and processing the special adhesive; and it is situated in one of the curves of the Double Eight on the Oasis. It has nothing to do with the English word colliery. Collerie is another neologism; Alain is as prolific as Shakespeare or Lewis Carroll in his coinings. Coller is to stick or adhere; and this amazing material is never riveted, screwed, soldered or attached with double sided sticky tape: it is always stuck, it has to be stuck, and it stays stuck. Hence the name. Shall we call this complex The Adhesion Centre? It includes offices and laboratories, reactors and silos, walkways and conduits, platforms and warehouses, all under the watchful eye of the green tower, otherwise known as the Pentagon. From the technicians down to the labourers, all the workers soon get sticky themselves; their workmates say they bring bad luck and have nicknamed them the Sticky Squad.

As for the Petite Chimie – let's call it the minilab – you will soon realise that this is an installation designated 'extremely hazardous'. You will find it along a dead end on the edge of the island site. You would be wise not to ask what they make there, and still wiser to refrain from inhaling anything even from a distance.

Near the crossing (on two levels), in front of the closed power station, is a kind of platform cut out of a vestigial canal. This is the Havre des Glisseurs – let's call it the hovercraft harbour. These devices stop here when they are not passing from one island to another in the archipelagic empire of ReFeRe, carrying an entire train on an invisible cushion of connective tissue and compressed air on the hovercraft principle. Old railway trucks act as studies and tool stores.

At the foot of the yellowish mountain – made up of a mixture of débris and detritus – is the Mine. This vast underground vault is reached by rail through a series of tunnels. Facing the platform at the bottom are underground installations. The most important of these, and of paramount interest to the workforce, is the kitchen. Here is concocted the famous (or infamous) railwaymen's soup. All the engine drivers stop here on even the flimsiest of pretexts in the hope of scrounging some. However, thanks to a special convoy, the Mobile Canteen, supplies of food are delivered to everyone's workplace throughout the site. 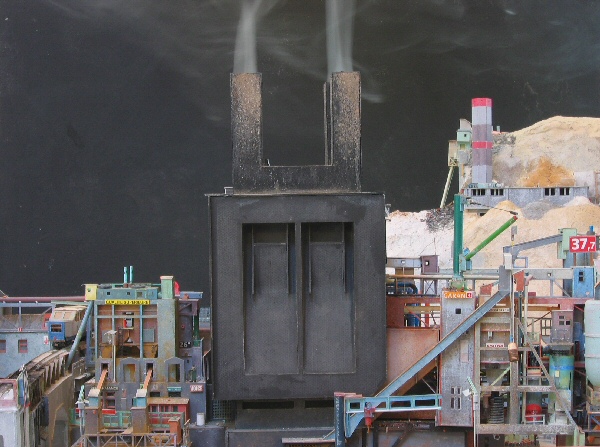 This is the most sensitive area, only recently unveiled. It provides the electric power necessary for the smooth functioning of the ReFeRe. The fact that the electric cables are invisible is an ecological and aesthetic goodwill gesture which nevertheless cannot gloss over the extremely problematic, polemical – nay, machiavellian – nature of everything that happens within this amazing complex.  The mere word 'nuclear' has had its uses; it has inspired fear and respect and attracted generous grants towards the cost of dismantling the plant – a simple matter because no plutonium has ever been involved here. Instead, under the guise of nuclear processing, fruit pips and stones were possibly  consumed in boilers. Wagons can be observed going in loaded with garbage of all kind, especially the most noxious, and coming out with oil drums – probably full of concentrated waste to sell abroad.

The Gridiron is a classic arrangement of parallel tracks where wagons are parked for loading or unloading. There are no points as such at either end. Instead sector plates are used, designed for trains with just one wagon: a unique arrangement, and very space-saving. The winding track – also a one-off – serves various installations both active and disused. Historically, its route has undergone some radical modifications, notably to overcome  the unreliability of the Lift, which is currently stuck on the first floor.

The Brewery got its name from its 19th century Central European appearance, but nothing as harmless as beer is produced there. This harmless-looking rectangular grey building harbours chemical installations which are definitely not fit to be seen. Beyond an intermediate building is a heavy duty mixer/crusher. This device, and others like it, are at the heart of the 'cost-effective development' of the VAC (Very Advanced Chemistry) of ReFeRe. Processing involves pounding waste, crushing it, grinding it, distributing it to all four corners of the site, transporting, mixing, pulverising and compacting it and generally rendering it completely unrecognisable.

The Very Tall Blast Furnace  (VTBF for short) is a towering black structure crowned by four chimneys, one at each corner, from which smoke billows from time to time, giving off strange stenches redolent of entrails glowing red or phosphorescing palely. We can know nothing about the metabolic process  at work here, and even less about what is going on underneath.

The Refinery is a storage facility which guarantees an ample supply of combustible material for the VTBS. Its reactors, reservoirs and silos, which are linked together  by walkways and conveyor belts and connected by brightly coloured pipework. Here too the role and function both of the parts and of the whole defy description. In any case noxious and obnoxious gases escape; and the little workshop at the foot of the mountain (yet another recycled railway truck) is fitted with a red schnorkel. The Refinery is staffed entirely by volunteers.

The Soft Mountain dominates the whole island as if it would like to swallow it up (which it will indeed do, one day). It is a giant spoil heap: layer upon layer of waste discharged, by means of temporary railway lines later dismantled, lift shafts that have been filled in, and no doubt green recycled cranes. The mountain waits patiently for the time when future generations, their studies funded by scholarships, will develop the technology to make use of it. The orogenesis – the quasi-geological evolution - of this mountain will have swallowed up at least one beautiful building, whose walls are still visible.

At the other end of the Gridiron, the mighty Cruncher has broken down. A drum on its way to be recycled has landed askew on  the conveyor belt and fouled up the works. Close by is the landing stage which looks out onto the immensity of the Stroma, which resembles an infinite morass of waste. 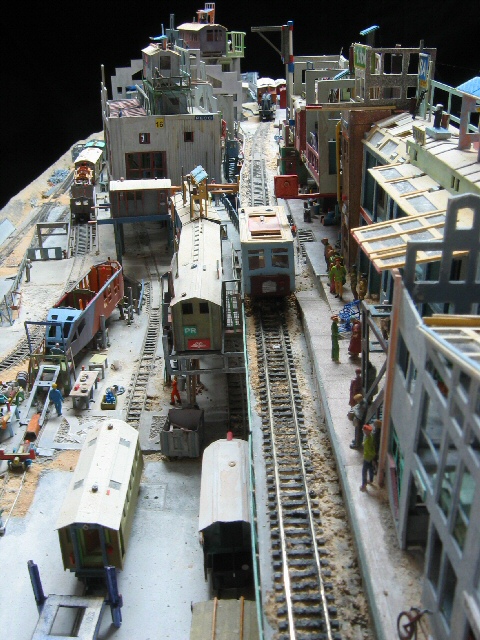 The distinguishing feature of this island display is its historical interest - it is the earliest – together with its rectangular layout, the inventiveness of the turntable and the grand scale of the premises of the Académie des Sciences et Arts Ferroviaires (ASAF) – the Academy of Railway Arts and Sciences.

The Turntable with its three main railway tracks enables entire trains to be turned around or shunted into sidings at will. Its originality, its ambitious technology and its sheer geometric beauty  were the inspiration for the ReFeRe logo. The alignment  and the contacts with the fixed rails are entrusted – with tremendous daring – to swivelling gantries, the only ones of their kind in the world of railways.

The Experimental Recycling Facility, a mine from which nothing is extracted, is a cutting-edge laboratory, the scene of tireless research into methods of disposing of the precise blend of cement, asbestos and other secret ingredients from which everything here is constructed.

The ASAF premises, behind their elegantly carved pediments, house the deputy heads as well as the designers, the engineers, the teachers, the communicaters and their pupils, disciples, apprentices and trainees as well as various sycophants and hangers-on. Because of shortage of space they have built a 'wagonville', a shanty town overhanging the adjoining tracks. This shanty town of old trucks minus their wheels is used for storage.  In the courtyard, workmen are busying themselves with constructing a prototype AGV (Autorail Grande Vitesse – high speed railcar) while a small team of specialists concentrates on testing prototype seating.

The Station, at the top, is a mere halt with a platform where prospective passengers wait patiently for a train.

The Landing Stage, at the bottom, is served by a sloping branch line, whence the trains bound for other islands of the Archipelago are transported by a 'glider', which seems to remble a hovercraft.